1
a : an inherited, established, or customary pattern of thought, action, or behavior (as a religious practice or asocial custom)b : a belief or story or a body of beliefs or stories relating to the past that are commonly accepted as historical though not verifiable
2
: the handing down of information, beliefs, and customs by word of mouth or by example from one generation to another without written instruction
Christmas is a conglomeration of traditions.  Traditions of ‘mothers’ family, ‘father’ family, church family, religious background, neighborhood, city, state, nation etc….
Christmas being here, in 2 days, is bringing on memories of Christmas pasts. I was thinking of MY childhood Christmas’ .  My memories from childhood are nothing but joyous. I really only remember the good from Christmas.  The only oddness of this is my other childhood memories, not involving Christmas are pretty evenly good and BAD memories. I was not perfect, my parents were not perfect, my brothers were not perfect– Yet at Christmas I only remember good.   Except…. a few Christmas memories include my crying, almost hysterically, while my parents were taking the traditional Christmas Eve posed in front of the tree or fireplace in the new Christmas Eve PJ’s photo.

I actually do not know why I cried, only that I did. It was the customary pattern.  I also remember myself to be a bit too old to be crying over this tradition of picture.  Maybe I was getting into my PMS years.  Even the crying jags I had did not ‘ruin’ the whole Christmas, actually the only real reminder is the picture themselves.

OUr traditions of Christmas consisted of hanging the stockings with care, if we did not have a fireplace, we would hang on a door, or wall or…Actually we only had one home I know of that had no fireplace. 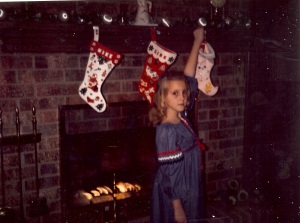 A present with the tag “Open December 24 was a tradition , along with the contents of such package being a new pair of PJ’s, usually a gown (for me not my brothers.)Standing in front of the tree with various family members, either with our newly opened present’s or prior too the opening (or both) was also a HAVE to event each year. 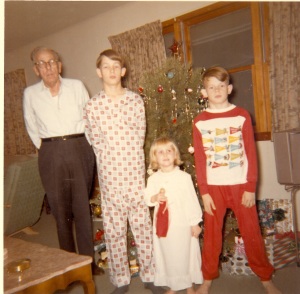 the present’s had a ‘tradition also.  The one and only one on Christmas eve.  Then on Christmas morning, Santa Claus gifts would be sitting in front of the tree, or around the tree, with each recipients stocking propped against the gift.  The gift of course was never wrapped, Santa did not need to wrap.  The stocking had a few treasures; combs, pocket knife for the boys, Little Kiddle for me, pencils (my parents were teachers) an apple, an orange, mini chocolate candies from Hershey, and nuts.
Another tradition was entering the living room.  We were never to get up and run to the room and view the Santa gift without Dad with a camera set up to catch the moment we spied our gifts.  Just as the photographer tries to catch the grooms face the first time he views his  bride coming down the aisle.  Christmas morning we were to get up, bathroom and brush our hair and teeth, but not change out of our Christmas PJ’s, , the opening of the presents was to photographed with everyone in PJ’s .  We were to look like Doris Day and Rock Hudson with our robes and house shoes and perfectly coiffed hair.   Dad would position himself ahead of us, in the living room, either ours or our grandparents (these are the only two places I ever experienced Christmas as a child) with the movie camera with BRIGHT light or years later camera with square cubed flash that never turned.  We would wait in the hallway till he gave the ok to come in.  I am sure this was a thrill for my older brothers, Kirk was 6 years  and Mike 11 older than I. Seriously, do the math, when I was of age to be anticipating the Santa display properly, I was at the least 4, Kirk would have been 10 and Mike 15.  Here they were waiting in the hall to be greeted with the blinding light from the movie camera, with glee, I am sure.
Once the proper amount of pictures were taken of we eying our Santa booty, Dad would begin to pass out the presents.  No one was to open until all had received theirs.  Then some how we 5 would open our gifts in an orderly fashion that we all could be aware of the others opening, calling out as we opened one from someone , “Thank you Mom and Dad, or Mamaw and Pawpa, or Sibling Name for the ball, doll, book…
Next would come the clean up, traditional, save the big pieces of paper and ribbon style.  Breakfast was traditionally not much. Then dressing in something given as a gift.  Setting our gifts out on our beds, so we could eye them all day. The traditions go on and on.
My parents were both teachers, so our Christmas began with the letting out of school and lasted until we went back to school, about 2 weeks.  Christmas was not just Christmas Eve and Christmas Day for me, it was a real vacation.  The family was all together, my parents were there every morning, every breakfast, every lunch every dinner.  For awhile, until my brothers grew and moved out, we all five would be HOME, and when my grandparents came they were with us for days, if we went to them again days and days.  Or at least that is how I remember it.
Now that I am grown and have gone through my own Christmas traditions, my own family growth, I know that the memories I have are as magical as Christmas.  From the time I was 11 my dad had a second job, to pay for all credit card splurges, he worked at Sears, and Montgomery Wards, there is no way he was home for those 2 weeks.  My brothers, both moved out on their own when they were 18, so from the time I was 8 MIke did not wait in the hall with me, and I was totally on my own by the time I was 12.  Mom suffered from migraines regularly, especially if she was not needing to work, she spent most of her time in bed when she had a headache. My grandparents did not spend every Christmas with us, they shared time with Mom’s family and their other 2 daughters. My earliest memories are from about 4 years, IF we spent every 3 years with my grandparents, until my grandfather died and my grandmother moved to the nursing home when I was 18, that only gives me 5 Christmas’ with them.  The memories of the good, and not the negative, I suppose is also a tradition.
We hear how important it is to make your own traditions in your family, apart from your childhood traditions.  I wonder.  I am actually thinking that the ‘traditions’ that tie us to the past, that are customary to insist upon having year after year, that disappoint if we do not ritually  act out– could possibly be the irritants at Christmas.  Making all the man made ideas happen.
The reason for the season, to celebrate God’s love for us, his desire to come into our world and inhabit a human life form, so he could eventually experience a horrendous death of that body and take all of our sins upon himself go to death and conquer that death so we could have the opportunity to be ‘back’ with him forevermore. Remembering, passing down, that magical gift is the only tradition we should keep alive.
Advertisement