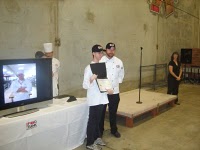 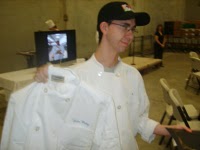 We just came back from attending Evan’s graduation from Culinary School. It turned out to be a much ‘bigger’ deal than we had thought it was.  A great program!
Within the school Evan already attends is the opportunity to take this class. It is offered and taught by the San Antonio Food bank.  As it turns out San Antonio Food Bank partners with many in the community and trains many in the culinary arts.  Also graduating the same day were some men from prison.  They trained at a different time than the Independence School.  The goal of the culinary is to equip these adults with the skills that could really help them get careers.  Evan received a certificate of completion in culinary skills. He also received his own chef coat with his name on it and everything!
The meal was great, pork loin, ettouffe-ish dish, bell peppers stuffed with seasoned hash browns. The salad was spinach and strawberries and pecans, with flakes of red pepper. The dessert was a carrot cake(Keith’s is better)with a marmalade tart.
Evan is doing wonderfully at the school. He has his bus pass, but not complete freedom to go on his own yet.  We are thinking that those at the school are a bit protective of him and do not see his full potential yet.  He does have a way of hiding it well.
We were talking with him about his driving in San Antonio, which has been the plan since his moving there. The school said it would be ok and they would work it in the plan once he got his job. After driving San Antonio recently we were wondering if it would be a good idea. Evan very maturely thought that it would probably be better to ride the bus, he said “People drive crazy in San Antonio”.
He is also already planning his apartment when  he moves back home.  He will live with us a “little bit”, till he gets a job and then get an apartment. Then he will need a bed and some dishes and pots and pans. He wanted the Texas dishes Lee had had in his house in Lubbock, but I sold them in a garage sale. So “we will have to find something else”.
The big graduation should be about Christmas. Before that happens he will need to get a job in San Antonio then move to the apartments on campus and ‘live on his own’ for a few months.
The school is whining right now about the ‘economy’ and hoping it does not affect the students job opportunities.  Too much faith in the world and not enough in our God. God is going to surprise them all!!