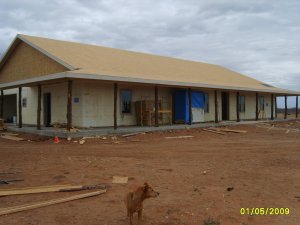 Okay my house is not finished. I was most sure that 6 months would be plenty of time to build a house.  Or at least be MUCH further along than we are. We really have been ‘doin sumthin‘ the whole time. But obviously NOT ENOUGH.

We (Keith and some of his guys from work) started the electric this last weekend.  That to did not complete in one day– It should in another.

We did find that there are a bit more ‘little things’ the framers did askew.  So we are contemplating NOT using them for the dry wall work– IF we do, I will be more aggressive and bossy(bitchy) with them while they are here.  The little things may be the norm, a few inches off here or there, a wall/door misplaced, (they fixed it,but it messed up a bit of my concrete floor, so I will have to become creative with the holes) A couple of walls were not anchored to the cement wall, which would really be an issue if they fell down.  Little things….

One of the little things was on the raising of the trusses, they (after much instruction of NOT to) put one too close to the gable, leaving us short one on one end.  They had to build another for that end. The end that got too many we had a room designed in the attic that might one day open into the living as a loft– an after thought, but the truss guy designed it so we could do this.  The moving of the truss though made it so it would be impossible to open this loft to the living without much redesign.  So brain storm of Meg Ash and I was to put the opening to the room on the outside of the house, with stairs going up to it from the outside– Like Doc’s office on Gunsmoke.  — It will be Keith’s poker room and or ‘doghouse’.  I keep trying to convince him to put a toilet and sink up there also, but so far he thinks the work will be more than the convenience.
The porches look great.
The roof metal guy is coming tomorrow to give us some estimates and measure
The jury is still out on the loan.
We brought the second set of doors home with us after Christmas (Keith went and picked them up in Houston)
We bought the master bath.
We have only had two really big arguments since last posting.. pretty good for the circumstances– one of them being KEITH.
Advertisement